The Rule of Three dictates that you can last three minutes without air, three days without water, and three weeks without food. It’s a harsh, yet realistic survival rule that normal people don’t 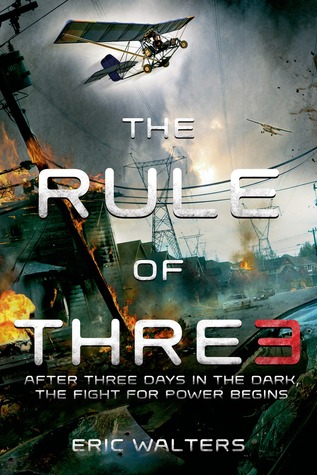 have to worry about on a day to day basis. Adam, the main character of this book, is a rule abiding student at his high-school working on a paper with his best friend Tom when the power goes off. What he and everybody else naturally thinks is a power-outage quickly escalates into a bigger problem as other people realize that not only are phones dead but cars as well. In his rush to get home and pick up his little brother and sister in his super old car that’s somehow still working, Adam realizes that anything at all with a computer in it is broken. As more and more other people realize this, chaos escalates as people rush to gather supplies and valuable items. Once Adam gets home he sees his neighbour Herb who quickly tells Adam to drive him to a store so he can buy chlorine tablets. Confused, Adam does so and it’s only until afterwards on their way home that Herb tells him the purpose of the chlorine tablets. Herb explains that if the situation lasts for a long period of time they need food and clean water, which is what the chlorine is for. Sure enough, as the days past, Adam sees people get more and more desperate and sees chaos and destruction rise.

In a fantastic apocalypse book, Adam must learn to adapt to a changed world and together, with his mother who is a police captain and his surprisingly essential neighbour Herb, they must bring together their neighbourhood into a strong settlement that can hold back the tides of chaos and murder that are rising up from the ashes of civilization.

5 thoughts on “The Rule of Three”